The final hurdle is often the highest – not literally of course, but metaphorically speaking.

As Grand Final day loomed and the opportunity to snare back-to-back premierships arrived, the Hamburg Dockers reflected on its 2019 to date: it had vanquished every opponent… it had leaped over, snuck around or simply barged through every obstacle that had stood in its way and friendships within the club had bonded closer than H Clarkson’s bricklaying on the worksite. Not that any of it counted as the players lined up for the opening bounce in steady rain.

The boys’ usual pre-game routine was understandably distracted as the female Dockers clinched the League’s inaugural AFLGW premiership and the value of the win to both teams was on full view as the men and women celebrated together – albeit briefly – before the men returned to Naumann’s now Deutschland-berühmt warm-up. Coach P Richter knew a fast start against Berlin would prove crucial in the deciding encounter and despite the nerves and excitement of the girls’ win, his chargers proved the superior team early.

Half-time Clarkson and the League’s MVP S Gilbert were both on song early with valuable conversions, while C Woodward brought his expected aggression to the contest and Naumann, inspired by an early-season photograph proving he could jump higher than Croc counterpart Rowan, continued his stunning season. P May again had the job on Josh and set about smothering him out of the game from the outset.

Hamburg raced away to an early two-goal lead and appeared well on top structurally in the final moments of the opening term before disaster struck. H Thring (7 first-term kicks, 2 marks, 2 links in goal-scoring chains) lead out from attack only to double back as the ball sailed over his head. The resulting acceleration proved too much for his dry-aged hamstring, which let go. His omission was barely felt in the second term as the likes of Naumann, Clarkson and O’Shea continued to steer the Dockers truly and set up a 21-point lead heading into the main break.

But a top-heavy forward line and a lack of linkage between offence and defence began to cause a few headaches for Richter and his players, with Berlin pulling the margin back to within striking distance through the third term. Gilbert had again been well-held but as he told his Berlin opponent he only needs a quarter to turn the game on its head, as he did in the wet against the Crocodiles a few months prior. Intense pressure from May negated Josh’s influence as well as possible but the strong-marking forward still had ample opportunities to wrestle his side into a winning position. He managed to reduce the margin to single figures and for several heart-in-the-mouth minutes it appeared as though Berlin might just do enough to steal victory. Friendly fire saw both Clarkson and Richter leave the field with a Cauliflower ear and Harry Potter scar respectively and much to the pleasure of the Dockers’ coach he returned to the field bandaged up as Joel Selwood, ready to pose for Coach Courageous action shots.

The final siren marked the end of a remarkable undefeated season for the Dockers – the most successful in the club’s history. Framed premiership jumpers that made their way back in time to be sold during a 1990s Channel 9 broadcast of the cricket would be titled “Total Dominance” or “Eternal Glory”.

The celebrations lasted well into the next 72 hours and, to be perfectly honest, the details of said celebrations are not suitable for publication.

The bus ride back to Hamburg will live on in the memories of all aboard (the stories I mean, the memories themselves are already very hazy). Back-of-the-bus shankings, mosh pits, bare bums, FaceBook updates (onya Mad Dog) and a friendship with a Belarusian truck driver all speak for the camaraderie that have made this Hamburg Dockers Australian Football Club the close-knit premiership juggernaut that it is.

A final question remains, though. Did that hitchhiker ever make it to Kiel? – An Interested Observer 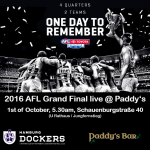 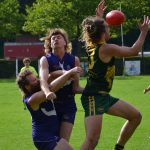